Did you ever have one of those weeks when you just feel stupid?  Dear lord, I hope so, because I sure don’t want to think I am the only stupid person on the rock.
Under normal circumstances, I like to think I am reasonably intelligent (I also like to think I am pretty and classy, but those are delusions for another day).  I am a good speller (6th grade spelling champ 3 years in a row!), I can add lots of numbers,  I could figure sales tax in my head til those evil people in Augusta changed the tax rate to 5 ½%.    But recently, I just meandered into a tunnel of dumbness.

It all started Sunday before last.  The weather bunnies were promising it would be one of those stay-inside days, there was a crucially important football game on and I  had recently unearthed a turkey from the bottom of the freezer.  Had all the makings of a Thanksgiving in January.  Before our beloved Patriots had scored, the fabulously appointed bungalow smelled like the holidays, and when I hoisted that golden bird out of the oven, it was pure photogenic poultry perfection.  Then I sampled a little of the golden crispy skin (my favorite part).  It was notably nastily nauseating nastiness.  While I waited for the hulking evil beast to cool enough so I could wrestle it into the trashcan, I fished the label out of the trash – “Best if used or frozen by 11/27/2009.  Well then.   I sort of redeemed myself by concocting a pasta/shrimp/tomato thing with lots of garlic.  It was quite tasty, but there was not nearly enough garlic to get the funk of 4 year old turkey off my palate.  And although I felt really stupid for wasting time and resources (and the stuffing...oh the humanity) on this most foul fowl, I did learn that 4 years is too long to keep something in the freezer, so it wasn’t a total loss.


Still wanting poultry; and not wanting to admit defeat at the wings of a frozen dead bird,  the next morning I took some chicken thighs from the freezer.  I knew these were safe because I had vacuum-sealed them just a couple weeks before.  Little helpful hint:  when vacuum sealing juicy stuff like chicken, it’s a nifty idea to place a folded paper towel on the top of the food- keeps the juices from infiltrating the seal area, and makes cleaning the sealer easier.


Anyhoo, while my guy mixed himself a cocktail after work that evening, I breaded the chicken thighs and and blathered on about my day,  listened to him talk about his day, and waited for him to take a breath or a sip so I could keep talking about my day.   After the thighs  were all nicely covered in a lovely herby crumb coating, and a healthy (by my standards—the American Heart association may have a different guideline) drizzle of butter, I slid the pan in the oven, and waited for him to take another breath so I could keep talking about me.


When the chicken was done, I plated it along with mashed potatoes (they had not been used the previous  night) and roasted carrots.  I couldn’t wait to dig in.  Michael was dining contentedly.  I peeled off a healthy (once again my by standards) hunk of herby, buttery chicken skin and sunk my teeth in.  Or tried to.  I could not bite through it.  I tried to tear it apart with my fingers – no go.  I started to panic.  Michael, there is something wrong with this chicken.  Don’t eat any more.  He was savoring his second piece and assured me the chicken was fine.  I waved the tarp of chicken skin in his face.  No, it’s tough, it’s like leather, it’s….got little teddy bears on it.


Apparently whilst flapping my yap and prepping the chicken, I neglected to remove the paper towel (please refer to helpful hint above) which had enveloped around one thigh and I just breaded right over it.  Yes, I felt stupid, but I did learn that I should focus a little more on the task at hand and a little less on making every conversation all about me.  I also learned that a wet, buttery Bounty towel is strong enough to spend 40 minutes in a 325 degree oven and not be ripped apart.  Let’s go with that lesson, because I really like talking about me.


Michael took over the dinner duties for the rest of the week, which was probably for the best.  I spent that time being stumped by crossword clues like ‘ 6 letter word for Hebrew Month, and 9 letters and a Sanskrit character for a term meaning ancient Babylonian term for waxy buildup on cloven hooves.  My stupid streak continued.  I thought some music might set things rights.
After being frustrated by the myriad of remotes necessary to play a freaking Clapton CD through the Xbox, (and  pushing a combination of buttons that may possibly have temporarily screwed up dinner service on the International Space Station) I figured I might as well go for broke and actually read the new lease for my continued stay at the fabulously appointed bungalow.  I am pretty sure I understand the intent of the document – if I promise to pay my landlords money, and not smoke inside, and not burn the place down or trash it, they will let me and my ’eclectic’ collection of crapulence occupy their building and enjoy it’s view of the Open Air debris garden for another year.  Simple enough, but they used  so many words to express this simple concept.  So very many words, and so much punctuation.  Heretofores, whereasses, underroos, and whatnots.  I have rented from the same family for years, and have never read the lease before, just blindly signed it (the same approach I highly recommend when presented with a ‘release form’ before engaging in some boneheaded shenanigan like whitewater rafting down a raging river or walking down a church aisle), so I scrawled my name on the bottom (I believe I signed on the correct line) and returned it to my landlord’s representative, fully aware that I was fully unaware of what I had just agreed to, but it may possibly have involved something about underwear.

Fear not, faithful fan.  There is a light at the end of my dark, dense stupidity tunnel.  Michael and I took a weekend trip to our favorite little getaway spot – Greenville.  Because certainly if you are fed up with the cold and snow and greyness here on the rock, head north.  That may seem stupid, but enough of my friends do it, so that makes it OK.


We went to a local convenience store to purchase what I hoped would be the scratch-off ticket that would net me enough money to buy my little dream cottage with the spectacular kitchen I’ve had my eye up on there (still in the stupid tunnel).  Anyhoo, while at the store I spotted this. 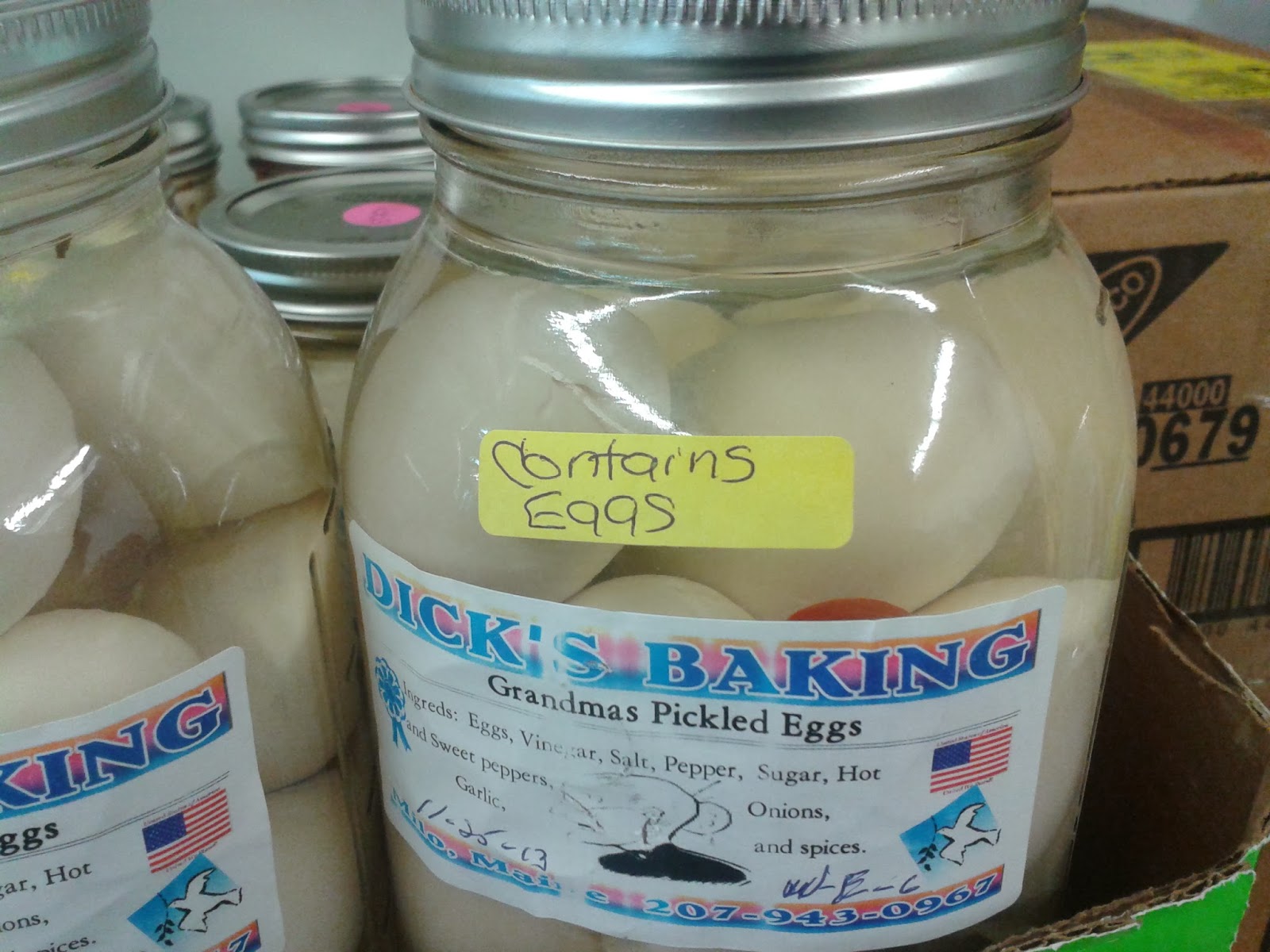 Just knowing that there is some consumer with an egg issue who said 'Y'all need to tell us when you put eggs in here.  I coulda cramped right up', thereby necessitating adding a label to Grandma's Pickled Eggs warning consumers that the clear mason jar in which you can see the eggs CONTAINS EGGS makes me feel a whole lot smarter about myself.
I breathed a sigh of smart relief, and then, in my best Beavis or Butthead voice  said aloud 'Heh heh.  Dick's Baking'.

Hey, I feel smarter, I am not Einstein.